All knives are graded for hardness.  The harder the steel in the blade, the longer the knife stays sharp for and the more exquisite the cutting edge feels.

In contrast, the softer the steel, the quicker it blunts and it doesn’t ‘feel’ as sharp, even when it’s brand new out of the box.

For many years, knife manufacturers have been trying to use increasingly harder steel in order to achieve the ultimate cutting edge.  The hardness of stainless steel is measured on a scale called Rockwell;  Rockwell 62 º (also known as HRC62) being the highest grade commercially available.  However, the brittleness of such hard steel has always been a limiting factor – therefore knife manufacturers have had to stop short of what is considered ‘the ultimate steel hardness for a knife’.

Standard single layer Japanese knives will typically rate at between Rockwell 54 -58 º.  This is the outer limit of steel production as any higher would result in snapping or chipping  of the blade if misused. 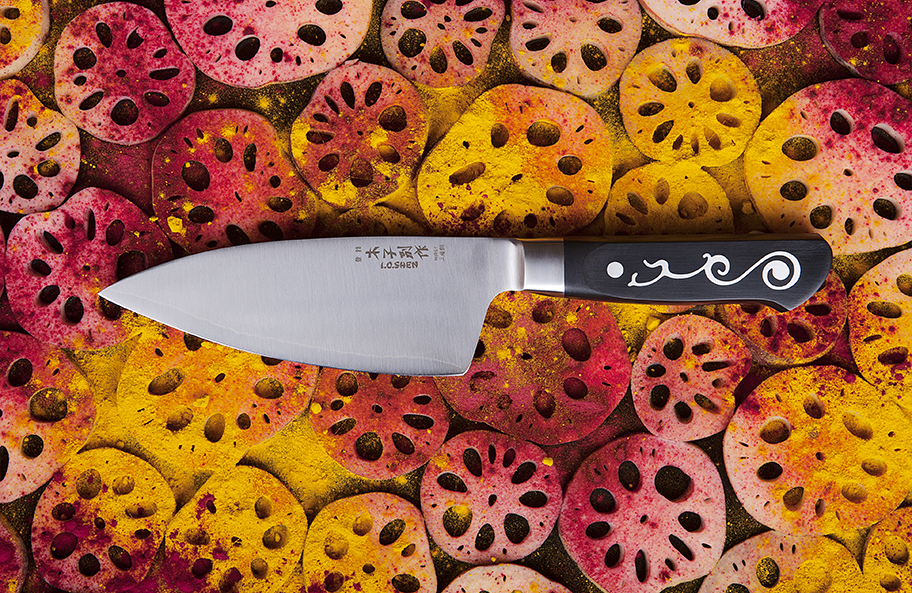 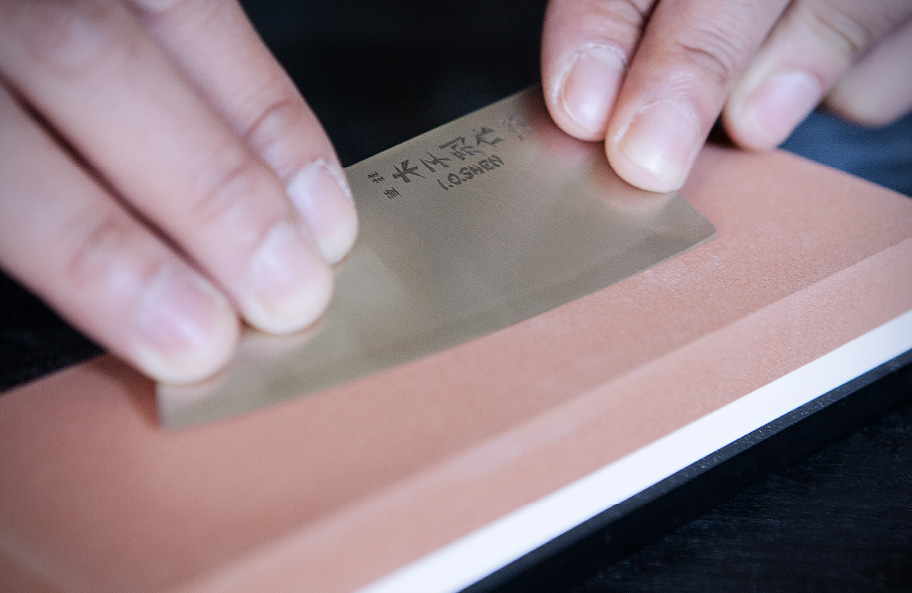 I.O.Shen Mastergrade knives have overcome this problem by using a layer of extremely hard Japanese steel (Rockwell 62º), which is sandwiched between two layers of softer stainless steel (Rockwell 10º), to produce the ultimate cutting edge. The softer layers add a protective shock absorbing element to the blade, whilst the HRC62 steel which runs through the middle is exposed at the edge of the blade to ensure that your knife is the sharpest blade that can possibly be manufactured.

Click here for an article published in the The Guardian about how I.O.Shen knives came to be……

CATRA (The Culinary & Allied Trades Research Association) are word renowned for their steel testing and consultancy services. I.O.Shen knives have been tested and certified as “Excellent” for initial cut and longevity of cutting edge.

What distinguishes I.O.Shen knives from other Japanese knives (apart from the Triplex Steel Technology) is that the handles have more of a Western influence.

Most, if not all, Japanese knives are very light and have metal, bamboo or wooden handles.  I.O.Shen handles are heavier and have the weight of a traditional German knife with the added benefit of Japanese steel which has been honed to a 15 º angle.

The handles also have a very distinctive Tai Tang pattern in the handle, making them a stylish knife choice.  Chef Felice Tocchini says that using I.O.Shen knives is “…like working with a piece of art”.

Launched in 2004, I.O.Shen Mastergrade knives are now established as a firm favourite with chefs and budding amateurs alike. 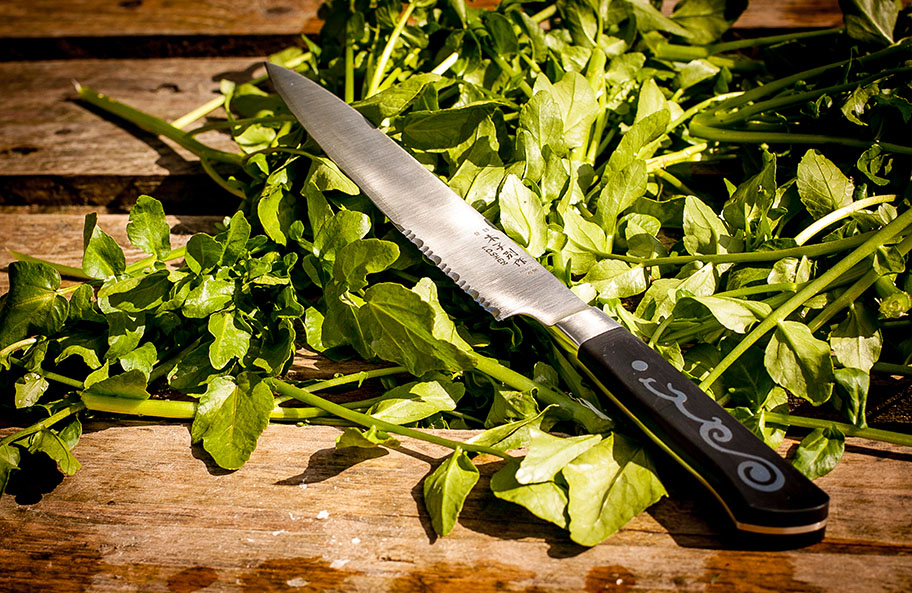 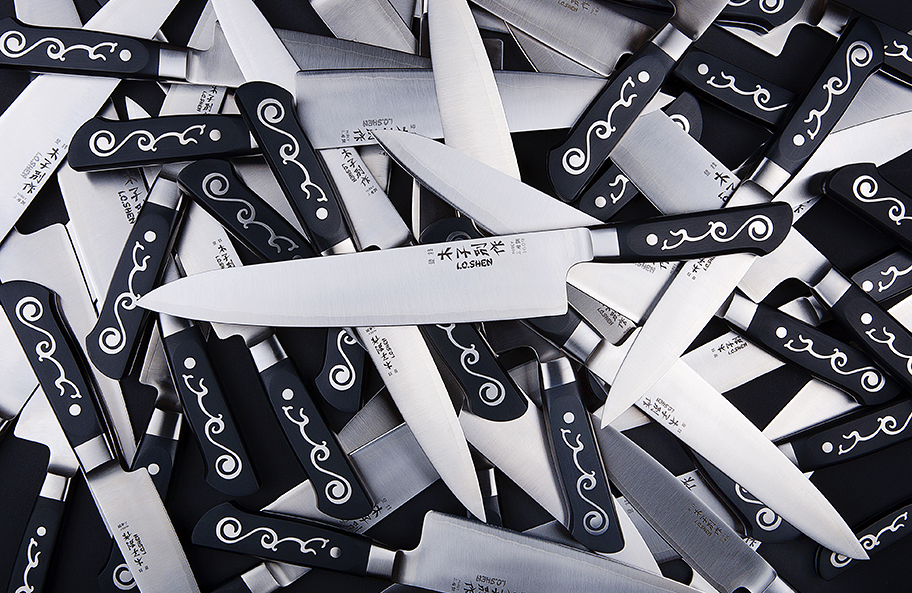 A force to be reckoned with!

With some wonderful testimonials and amazing Press and TV coverage – you are sure to find the right knife for the job. We were once hailed in one of the Sunday tabloids for being “The Luke Skywalker light sabre of chef’s knives”.

In 2007, I.O.Shen won the converted Excellence in Housewares Award (equivalent to an industry Oscar!) and we were finalists again in 2011.

The range was voted for by a panel of experts who recognised that the combination of an amazing cutting edge, a uniquely designed handle and astonishing price points could only mean that I.O.Shen was a force to be reckoned with!

Dont just take our word for it either!  Here’s what Soho Knives (Dennys) have to say about I.O.Shen: Click here for I.O.Shen review

We have High Street stockists all over the Great Britain and on-line partners. Also a great big thank you to all our Facebook and Twitter followers.

Thanks for all your support! Big love – the I.O.Shen team xx 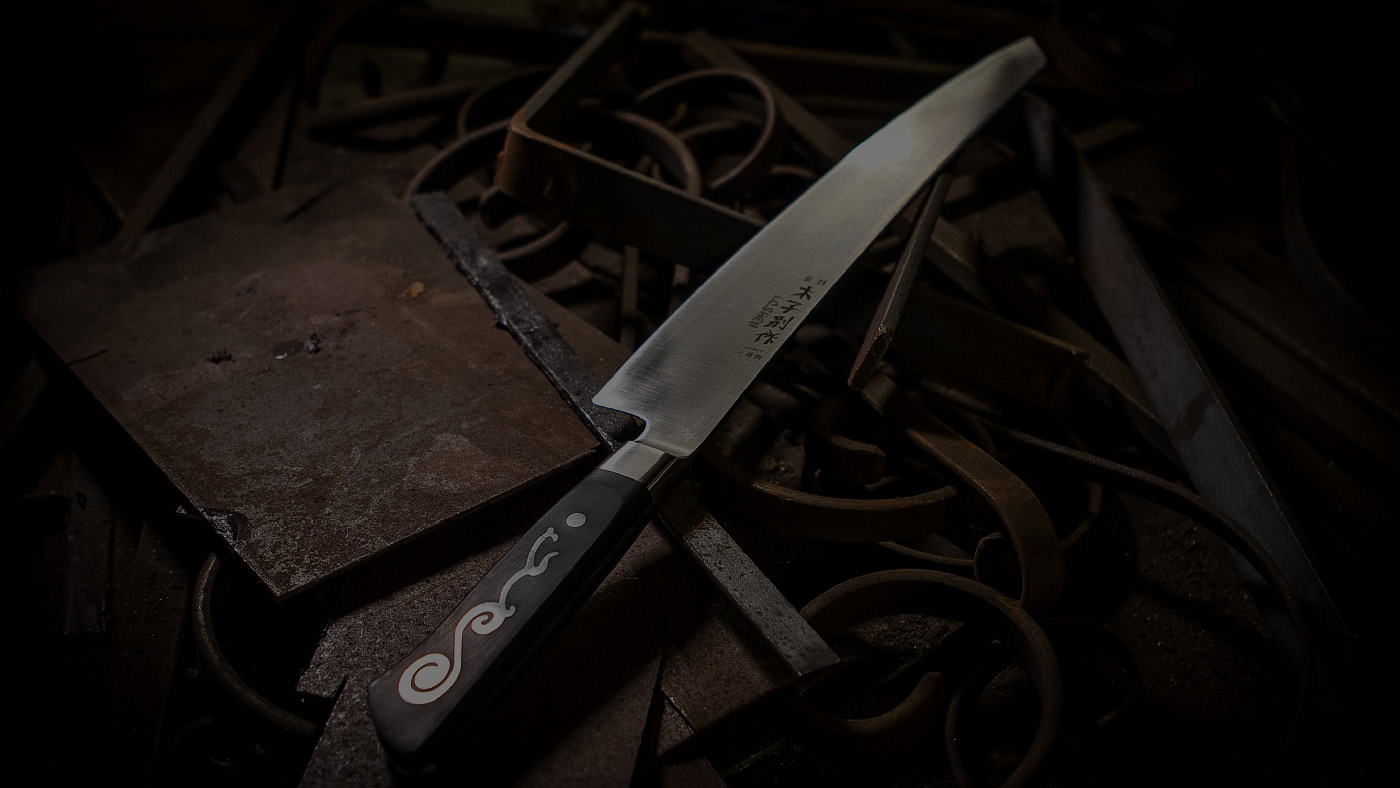 Chef’s Knife – 9″ / 24cm – This is the one! Literally will smash any job. Beautifully weighted and stays insanely sharp. If you love your kitchen, but you don’t have this in it, it isn’t a kitchen. Sorry.

Sahm Khom Slicer – I purchased this particular knife to give me a blade between my 9″ chef and 5″ utility knives, both of which are also I.O. Shen items.

The handle is as large as my chef’s knife, which I really like as I have quite large hands. The blade is not as heavy as I expected, which initially was a cause for concern, but after use, preparing onions, ginger, potatoes and herbs, I found those concerns to be completely unfounded. The balance of this knife is what makes it for me; I can use it for tap and rock chopping at considerable speed with utter confidence.

I would recommend this knife wholeheartedly for general use as it has both power and accuracy to cover most bases. A definite winner for me!

Chef’s Knife 8″ / 21cm – A ridiculously strong and reliable chefs knife that seems to want you to put near enough no effort at all into cutting an amazing knife for all levels of experience.

Broad Blade Chinese Shredding Knife – The straight edged blade of this knife makes shredding and cutting delicate herbs a breeze! Unlike most knife brands this blade won’t bruise salads or herbs and ensures a perfect cut every time. Perfectly weighted and balanced like all the knives in the range that I have and use daily!

Oriental Slicer – One of the best I have used. It is so versatile you just don’t want to use any other knife. Even my wife loves it and she is not in to knives. If you are looking for a knife that does everything, get this knife.

Chef’s Knife – 6″ / 16.5cm – After a very informative demonstration and trial, I bought my knife from the Good Food show in Birmingham a couple of weeks ago. I’m not making this up when I say that this knife has transformed the way I prepare food. I’m left handed and so using most knives can feel quite unsafe to me and I’ve had more cuts from blunt knives than I would care to count. The I.O Shen knife makes me feel exceptionally confident when I’m using it. The weight of it in my hand feels right, the handle is comfortable, and the sharpness of the blade means that my hand doesn’t tire from having to apply too much pressure when chopping food as it tends to with less sharp knives. I’m a big fan and already considering which I.O Shen knife to purchase next. Thank you I.O Shen.

I was surprisingly impressed with the speed and efficiency of ordering on the site and delivery of the goods.

Sahm Khom Slicer – This knife is simply stunning, I love it and so will you. These are the knives I have been looking for. They are perfect.

Extra Long Bread Knife – Unlike many serrated bread knives I’ve tried over my professional career, this knife will cut the softest or crustiest of breads with ease and precision.

Cleaver – Have to say I am really impressed with this cleaver. The weight and balance is amazing. It is a very substantial clever and makes getting through bones and tougher jobs so much easier. As with any of IO Shen blades, it does the work for you. It has become one of my favourite knives of the range. Worth the investment.